Prof.dr. Emmo Meijer studied chemistry at the University of Amsterdam and gained his PhD in biochemistry in 1979. That same year he joined DSM Research, where he played an active role in innovative fine-chemicals research in various capacities. In 1984 he was appointed part-time lecturer in bio-organic chemistry at Eindhoven University of Technology. From 1989 onwards he became more closely involved as a Business Development Manager in the expansion of DSM’s fine-chemicals business. In 1992 he was appointed Vice President of Strategic Planning in the newly formed DSM Fine Chemicals division. From 1994 to 1996 he was Director of Holland Sweetener Company (Maastricht, Netherlands), a joint venture of DSM and Tosoh (Japan). In 1996 he became Director of DSM Andeno (Venlo, Netherlands), a producer of pharmaceutical intermediates. Since 1 January 1998 he has held the post of Director of DSM Research and in 2001 he was appointed as DSM’s first CTO. As of 1st June 2005 he is Senior Vice President of Unilever responsible for Global Foods R&D. Prof. Meijer is a board member of various Dutch and European organizations in the field of foods, chemistry and biotechnology and an honorary member of the Royal Dutch Chemical Society. 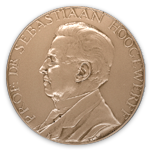